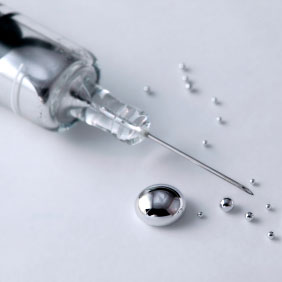 Amy S. Holmes, MD, known as “Dr. Amy” to her patients, is a physician whose son developed autism, leading her to team up with Dr. Stephanie Cave, author of the book What Your Doctor May Not Tell You About Children’s Vaccinations. The two explored the testing and treatment for mercury poisoning in autistic spectrum children for several years in Dr. Amy’s Baton Rouge, Louisiana clinic, successfully treating hundreds of children with autism.

Drs. Holmes and Cave were among the first physicians to use heavy metal chelation to recover autistic children, helping pioneer a new direction in medical detoxification of children based on careful attention to testing and nutrient/mineral supplementation. Their treatment success led to a DAN! Summit where Dr. Holmes was among 26 toxicity experts who met for three days in February of 2001 to create the first consensus paper on mercury detoxification, the Mercury Detoxification Consensus Position Paper in Autism and Related Developmental Disorders.

Autism and disorders resembling autism can be caused by a number of disorders, including Fragile X Syndrome, tuberous sclerosis, and phenylketonuria, and by at least one notable chromosomal abnormality, an inverted duplication of a portion of chromosome 15. But for the vast majority of cases of autism today, there is no strictly genetic explanation. As with many chronic disorders, most cases of autism appear to be caused by some genetic predisposition coupled with some early environmental insult…

Bernard, et al, have written an excellent article comparing autism with mercury poisoning. All aspects of both disorders are examined, including symptoms, signs and findings on laboratory tests. The parallels between the two disorders is disturbingly obvious, even to the most casual reader. This, coupled with many case reports of clinical improvement among autistic children upon removal of at least a small part of their whole-body load of mercury, seems to indicate that many cases of autism today are, in fact, cases of mercury poisoning. The early environmental insult, in these cases, is mercury exposure that overwhelmed the body’s attempts at detoxification.

Dr. Holmes is no longer in private practice and Dr. Cave has taken over her patient caseload.