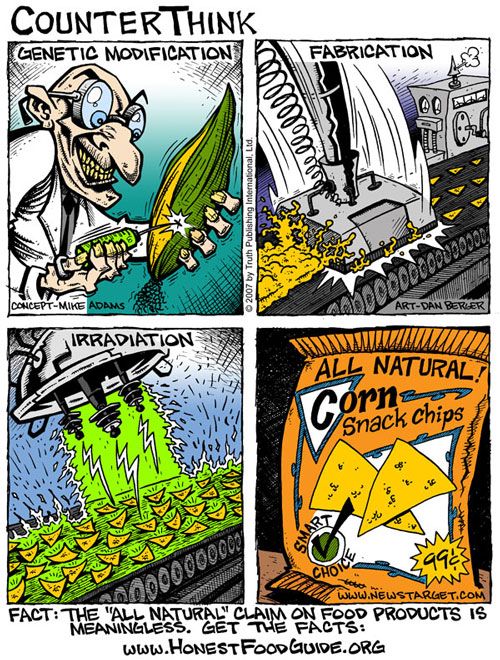 COMMENTARY BY MIKE ADAMS, CREATOR OF THIS CARTOON
Factory food manufacturers have figured out that slapping an “all natural” claim onto their processed, chemically-altered food products results in increased sales. Consumers, it seems, are trying to shop for healthier foods, and they’re easily fooled by “all natural” claims, even though the vast majority of food products sporting such claims are anything but natural.

The Food and Drug Administration (FDA) does not regulate claims of “all natural.” They might claim to, but in reality, they don’t. Food companies can get away with using all sorts of non-natural processes and chemical ingredients in a food product that they claim is all natural. For example, foods fried at high temperatures, resulting in the formation of cancer-causing acrylamides, are routinely labeled “all natural” in the snack section of the grocery store. And yet frying starches at high temperatures isn’t natural at all—it’s a human-invented process for making boring foods like potatoes taste interesting by loading them up with fat and salt.

The salt used in such foods isn’t natural either. It’s almost entirely processed salt, and even the products that claim to be made from “sea salt” are actually using a white, processed sea salt (not a full-spectrum brown or pink salt like you might find with Celtic Sea Salt, which is truly natural).

Grocery product makers are also adding various chemical additives to their “all natural” products, hiding them under innocent-sounding ingredients that don’t raise red flags with consumers. Monosodium glutamate (MSG), for example, is a neurotoxic substance classified as an excitotoxin. Consuming it causes migraine headaches, endocrine system damage, loss of appetite regulation (leading to obesity), neurological damage in fetuses (when consumed by expectant mothers) and many other problems. This is well known throughout the industry. Baby food manufacturers, for example, voluntarily removed MSG from their products decades ago following a public outcry about the dangers of MSG to babies and infants.

And yet today, numerous “all natural” food companies continue to use hidden forms of MSG in their foods, hiding them under innocent-sounding ingredients like yeast extract, autolyzed or hydrolyzed proteins (all of which contain MSG). Even the companies you’ve grown to trust in the “natural” food business are engaged in the blatant hiding of MSG in their products. Pay special attention to vegetarian food products such as veggie burgers. Read the ingredients on everything you buy and you’ll find that the largest “natural” food manufacturers still use hidden MSG.

(The newest ingredient to hide MSG under is called torula yeast. Watch for it on labels.)

What’s the definition of all-natural, anyway?
The truth is that food manufacturers can use just about any ingredients or processes they want while still claiming their foods are all-natural. They can take whole wheat berries from nature, mill them down and strip out 98% of the nutrients, bleach the flour with chemicals, “enrich” the flour with synthetic chemical vitamins, and then claim their wheat is “all natural.”

And why is it natural? Because it comes from the earth, they would say. It was grown by nature.

Sure it was, but then it was physically and chemically modified, adulterated, contaminated and altered in ways that destroy its natural properties. The final product has no resemblance to anything truly natural.

In the food industry today, there’s no official definition of “all natural.” It means whatever the food companies want it to mean. It can mean, for example, that all the chemicals found in the product simply aren’t listed on the label. (There’s no requirement for food companies to list chemical contaminants found in their foods.) A food labeled “all natural” can contain pesticides, herbicides, toxic heavy metals, trace amounts of PCBs, toxic fluoride, hidden MSG, high-temperature cooking byproducts, synthetic chemical vitamins and dozens of other non-natural substances. This is all perfectly allowed and tolerated by the FDA as well as all virtually every media outlet in the world. Cable news stations, magazines, newspapers and other media giants are all too happy to take money from junk food manufacturers and run their advertisements claiming their foods are “all natural.” There is absolutely no effort to determine whether such claims are really true or even partially credible. Media companies simply take the money and run the promotions, regardless of whether such promotions tell the truth.

There is little truth left in the food industry
Consumers are a gullible bunch, and food manufacturers have mastered the art of selling people crap while getting them to believe it’s actually good for them. There’s really no effort taken by the mainstream food industry to make foods healthy; there’s only an effort to make them appear to be healthy. It’s all about marketing. The same junk food crap that wasn’t labeled with any health claims two years ago is now labeled “all natural” and positioned in the healthy food section of the grocery store. Same ingredients, new spin. It’s all about positioning.

All this doesn’t mean there aren’t some genuinely natural products available in the marketplace today. There are, but they aren’t manufactured by the big brand-name food companies. A few smaller, niche-market companies are offering real food these days, but you have to search them out. Companies like Ewehorn make honest cereals with no garbage ingredients, and there are lots of raw foods companies that produce truly outstanding food products (such as www.RawBakery.com). Foods Alive (www.FoodsAlive.com) also makes real food, as do dozens of other companies I could mention.

← Prev: Full Signal Next: Loss of taste under the 3 main protocol herbs →