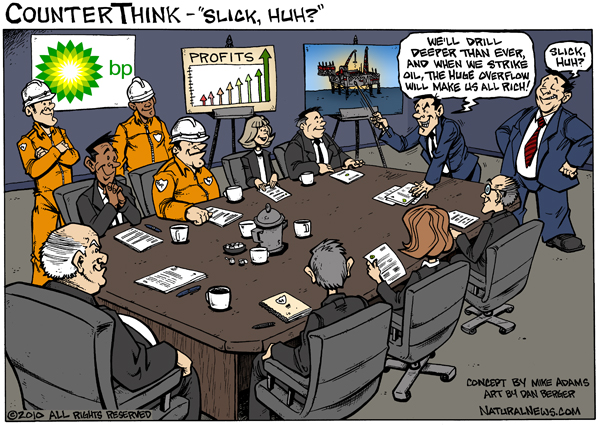 COMMENTARY BY MIKE ADAMS, CREATOR OF THIS CARTOON
(NaturalNews) Reports about the massive Gulf of Mexico oil spill have been largely underestimated, according to commentators, including Paul Noel, a Software Engineer for the U.S. Army at Redstone Arsenal in Alabama. He believes that the pocket of oil that’s been hit is so powerful and under so much pressure that it may be virtually impossible to contain it. And Noel is not the only person questioning the scope of this disaster.

A recent story from the Christian Science Monitor (CSM) reports that many independent scientists believe the leak is spewing far more than the 5,000 barrels, or 210,000 gallons, per day being reported by most media sources. They believe the leak could be discharging up to 25,000 barrels (more than one million gallons) of crude oil a day right now.

The riser pipe that was bent and crimped after the oil rig sank is restricting some of the flow from the tapped oil pocket, but as the leaking oil rushes into the well’s riser, it is forcing sand with it at very high speeds and “sand blasting” the pipe (which is quickly eroding its structural integrity).

According to a leaked National Oceanic and Atmospheric Administration memo obtained by an Alabama newspaper, if the riser erodes any further and creates more leaks, up to 50,000 barrels, or 2.1 million gallons, per day of crude oil could begin flooding Gulf waters every day.

When this disaster first occurred, the media downplayed it. BP spokespersons were quick to claim that the leakage was minimal and that crews would eventually be able to contain it. But as time went on, it became clear that things were not under control and that the spill was far more serious than we were originally told. (Gee, sound familiar? Remember Katrina?)

Yet some of the media reports still seem more like press releases than actual reporting because they continue to repeat what the public relations cleanup crews (pun intended) would like the public to believe rather than what’s actually happening. Reality, it seems, has a nasty habit of interfering with corporate spin.

The New York Times yesterday reported that BP is working on a large containment dome that is intended to cap the leak and catch the escaping oil so that it can be safely pumped to the surface. Meanwhile, crews are said to be working on fixing the broken blow-out preventer valve that should have stopped the leak from happening in the first place, but they have been unsuccessful thus far.

Almost every report says that BP is doing everything it can to contain the spill and stop the leak, even though the company claims it is not technically at fault. According to an article from the U.K. Daily Mail, BP’s CEO Tony Hayward recently responded to the cleanup efforts by explaining, “This is not our accident but it is our responsibility to deal with it.”

Swiss-based Transocean is the company that actually owned and operated the sunken rig. It manned the rig with its own crew and BP just leased it from Transocean (which makes you wonder why BP is so willing to take full responsibility for everything).

BP says that it’s working on a relief well, but that it could take up to three months to complete. Until then, the company is trying several different approaches to at least slow the leak and hopefully stop it altogether.

Mind you, almost all of the information about the spill from day one has come directly from BP which obviously has every incentive to downplay the true environmental destruction that could be caused by this oil spill.

Even the word “spill” is incorrect. This isn’t some ship of oil that spilled into the ocean — it’s a “volcano” of oil spewing from the belly of Mother Earth herself. It’s under extremely high pressure, it’s spewing a huge volume of oil directly into the ocean, and there so far seems to be no human-engineered way of stopping it (short of setting off an underground nuclear bomb near the well site).

According to the CSM article, environmental risk models are normally performed for pollutants like crude oil, yet not one model has yet been released for this incident by BP or the Environmental Protection Agency (EPA). Many are wondering why this crucial information has not been made public. Could it be because the results of the model might seem too catastrophic?

Neither has there been an adequate explanation given for exactly why the oil rig exploded… twice! Some reports indicate that the crews responsible for properly cementing the well casing didn’t do it right. Others suggest that the oil deposit was just too large and under too much pressure for the equipment to handle it. (Be careful where you poke around the planet if you can’t handle what comes out, right?)

It’s also important to note that, according to a recent New York Times article, Halliburton was actually the company responsible for all the cementing work on the rig, which brings a third party into the picture.

BP’s federal permits allowed the company to drill up to 20,000 feet deep, but according to one of the workers who was onboard the rig during the explosion, drilling in excess of 22,000 feet had been taking place. This same worker is said to handle company records for BP, but BP has denied these allegations.

BP has declined to comment, however, on other allegations that the spill happened because it chose not to install necessary deep-water valves which would have acted as a last resort seal of protection in the event of an emergency.

Several other allegations include suspicions that the crews allowed gas to build up in the well bore and that the rig operator tried to detach too quickly from the well, causing a disruption.

BP, Halliburton and Transocean have all indicated that they are continuing to investigate the situation. When companies investigate themselves, however, the truth rarely comes out.

The possibility of an extinction event?

It’s hard to say exactly what’s going on in the Gulf right now, especially because there are so many conflicting reports and unanswered questions. But one thing’s for sure: if the situation is actually much worse than we’re being led to believe, there could be worldwide catastrophic consequences.

If it’s true that millions upon millions of gallons of crude oil are flooding the Gulf with no end in sight, the massive oil slicks being created could make their way into the Gulf Stream currents, which would carry them not only up the East Coast but around the world where they could absolutely destroy the global fishing industries.

Already these slicks are making their way into Gulf wetlands and beaches where they are destroying birds, fish, and even oyster beds. This is disastrous for both the seafood industry and the people whose livelihoods depend on it. It’s also devastating to the local wildlife which could begin to die off from petroleum toxicity. Various ecosystems around the world could be heavily impacted by this spill in ways that we don’t even yet realize.

There’s no telling where this continuous stream of oil will end up and what damage it might cause. Theoretically, we could be looking at modern man’s final act of destruction on planet Earth, because this one oil rig blowout could set in motion a global extinction wave that begins with the oceans and then whiplashes back onto human beings themselves.

We cannot live without life in the oceans. Man is arrogant to drill so deeply into the belly of Mother Earth, and through this arrogance, we may have just set in motion events that will ultimately destroy us. In the future, we may in fact talk about life on Earth as “pre-spill” versus “post-spill.” Because a post-spill world may be drowned in oil, devoid of much ocean life, and suffering a global extinction event that will crash the human population by 90 percent or more.

We may have just done to ourselves, in other words, what a giant meteorite did to the dinosaurs.