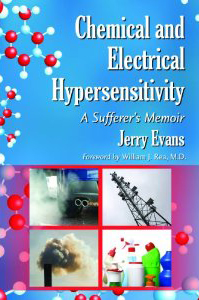 Chemical and Electrical Hypersensitivity: A Sufferer’s Memoir by Jerry Evans is a wonderful new book that chronicles his becoming sick and living with severe environmental illness (EI). Though there are a number of excellent books on the market that seek to educate about the physiology or treatment of environmental illness, this is a rare personal story that anyone who has walked a similar path will relate to, and those who haven’t will learn a lot about this incredibly challenging condition.

Evans is a former computer engineer who was living a happy and successful life when he began experiencing strange reactions to everyday chemicals in 1996. He discusses these symptoms with his doctor, who shows no interest. “It was then that I realized that I had been very wrong, relying on the medical system.” Thus begins Evans’ nightmarish descent into severe chemical and electrical sensitivity, a journey which literally and figuratively took him thousands of miles from where he thought his life would go. Evans describes it all in this book with a humanity and wry perspective on his fate that makes this a most educational and enjoyable read.

After several bad experiences with clueless conventional physicians, Evans diagnoses himself with Multiple Chemical Sensitivity (MCS) after reading “Living Well in a Toxic World” by Lynn Lawson, which precisely described his symptoms. He learns about Dr. Sherry Rogers in New York, and has a very positive experience at her clinic. Eventually, however, she refers him to the Environmental Health Center-Dallas (EHC-D) and Dr. William Rea.

Evans takes a leave of absence from his job and spends seven productive weeks at EHC-D. One of the things I found most interesting about his book is the very detailed descriptions of the clinic protocols, fellow patients, and life as an EI (person with environmental illness) in Dallas. Though some things have undoubtedly changed over the past 10 years, this information should be very helpful for anyone considering visiting the clinic. (Author’s note: I have personally spoken with many patients of EHC-D, some of whom were greatly helped and some who were not. As with any treatment for EI, your results may vary).

One of the best things for Evans as a newbie EI is being in a community of people who share and can relate to his situation. “We share a bond of understanding,” he writes. “It was liberating that I could just walk up to other people and not be concerned about whether they would make me sick. I was suddenly able to have a social life again.”

Evans returns to Ohio and resumes his career, but everything changes the following spring when he becomes sensitive to all forms of electromagnetic frequencies (EMF), including those from computers, cell phones, air conditioners, and even his phone and car. As you can imagine, this electrical hypersensitivity (EHS) imposes extraordinary new limitations on his already challenging life. To avoid EMF from neighbors’ electric appliances, Evans begins camping in some nearby woods, and realizes he must return to Dallas for a longer treatment period. Meanwhile, he continues to try to hang on at work despite suffering daily from exposures. In the end Evans finally realizes what so many of us have learned the hard way: “Even though my decision to tough it out did not kill me, it did make me even more sensitive to electrical emissions than I would have been if I had been more sensible and stopped at an earlier period…battling against my own body cost me dearly.” With environmental illness, discretion is truly the better part of valor.

Evans returns to Dallas, planning to be there for two months and ends up staying for over two years. To minimize EMF exposures, he moves to the EI camp in Seagoville, just outside of Dallas. I found his description of life at the camp fascinating. I’ve heard bits and pieces about it from friends who have stayed there, but Evan’s detailed and often humorous insights made me feel as though I shared the experience with him. For example: “The whole camp had a post-apocalyptic feeling to it, like something out of an old Mad Max movie. It really looked like what it was: a refugee camp.”

During his long stay in Dallas, Evans continues to receive treatment at the EHC-D clinic, gets helpful energy work from a practitioner named Debby, applies for and receives disability, and is forced to move around frequently within the Seagoville camp to avoid EMF exposures from fellow residents’ air conditioners and washing machines. He also becomes painfully aware of the darkest side of the illness when several current and former camp mates take their own lives. Evans deals with this sensitive subject with great compassion.

He also writes the best description I have ever read about what it feels like to be stricken with environmental illness—the harrowing sense that the benign, predictable world has gone mad and literally turned against you. A psychiatrist ignorant of EI would label this as paranoia, but it’s simply reality for those with MCS or EHS. For someone disabled by this illness, Evans also shows surprising empathy for those who dismiss environmental illness as psychological. “I used to be extremely healthy and remember not at all comprehending what it meant to have a bad back or any of the other problems I sometimes heard other people complain about, so I have seen the other side of this issue.” However, Evans very effectively points out that many other illnesses, such as Lyme disease, multiple sclerosis, and endometriosis, were initially regarded as psychosomatic before being accepted by mainstream medicine.

Evans eventually finds a car he can tolerate and decides to move to Arizona for the clean, dry air. His descriptions of the various EI communities he visits there are enlightening and should be helpful to anyone considering relocating themselves. He finally lands in Dolan Springs and finds a measure of peace there. His portrayal of Dolan is detailed about both its virtues and warts, and often entertaining.

In sum, this is a wonderful read that I highly recommend. Evans takes what could have been a depressing narrative and enlivens it with his courage, humanity, and sense of humor. Those living with EI will find a lot to relate to, and will almost certainly learn something from Evans’ descriptions of his experiences in Dallas, his successful battle to win disability, and his search for a safe place to finally call home in Arizona. And his balanced yet utterly convincing perspective on those who label environmental illness as psychological makes his book an especially effective tool to share with family, friends, employers, or doctors who may be skeptical. buy this book

A computer engineer’s spellbinding personal story about the dangers of technology. (5 stars)
The author sounds the alarm about chemical and electromagnetic dangers without being alarmist. With an engineer’s analytical ability and objectivity, Jerry Evans methodically chronicles his experience of becoming increasingly sensitized to the daily exposures most people take for granted. With persistent resourcefulness and resiliency, he restructures his life to be able to continue working at the job he loves. Finally he is forced to abandon his career, and his home, and focus on simply staying alive. The book reads like a mystery. It’s a spellbinding account of tenacious survival. A highly recommended read. I’m giving copies to everyone I know, including my local library.

Reads like a science fiction novel (5 stars)
This book is an extraordinary account of one man’s frightening journey into the morass of extreme chemical and electrical sensitivity, told with compassion, humor and courage. This is not an informational book in the strict sense, but reads like a novel as you follow his almost unbelievable journey from productive, healthy, hard working, tax-paying computer consultant, to being reduced to living in what was essentially a refugee camp, unable to interact with any form of technology, the rest of the world and at times even some of those in the camp.

The experiences which Mr. Evans retails would easily break the spirit of most people (and the accounts of the suicides he has witnessed amongst others in the same situation are tragic), yet the acceptance and detached amusement he brings to his absurdly difficult situation makes the book a delight to read. Science fiction could never be this good!

While there are now a number of excellent books on the biological and medical aspects of chemical sensitivity (such as Pamela Reed Gibson’s “Multiple Chemical Sensitivity”), which include basic instructions on how to clean up your life to avoid becoming chemically sensitive yourself, very few have addressed what actually happens to the daily life of a person who becomes so sensitized they can no longer function in mainstream society. This book helps fill that gap, and portrays in excruciating detail exactly how a person’s life can unravel so totally when they become severely chemically and electrically sensitive through absolutely no fault of their own. I think people are afraid to look at or hear about this in too much detail and the amount of denial around this situation is huge.

Thank you Mr. Evans for giving us a true insider’s look at these misunderstood and stigmatized conditions. There needs to be so much more government regulation of chemical and electrical exposures for the general public, or more and more people will find themselves in this exact same situation — no one is immune. Let this be a wake-up call to those in government and anyone else who thinks this is not a problem of growing and ominous proportions. It CAN (and just might) happen to you or someone you love.

read the memoir of another MCS/EHS long-term Seagoville resident