MCS activism: How to be represented in an unsafe place 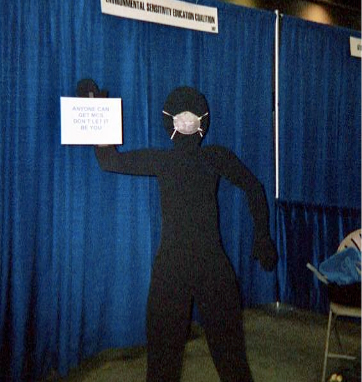 People with chemical sensitivity or electrical sensitivity are often overlooked by the public and by officials. It’s difficult for us to travel to testify at public hearings, and once there, there are many barriers for us to actually be in the building and among the people there.

Activists from the Swedish support group for the electrically sensitive came up with an innovative idea. They wanted to put up a booth at a health expo, but had nobody who could staff it due to the exposures from cell phones, etc. They created a dummy cutout, which instead staffed the booth most of the time. The local paper even ran a story on it.

EHS/MCS activists in Arizona, USA, heard about the idea and created their own version. It was named “E.I. Jane” as a play on “G.I. Joe,” the popular action figure for little boys. They made it out of black plastic poster board (cardboard can also be used). The daughter of one of the activists laid down on top and her outline was traced with a pencil and then cut out with scissors. It’s best if it stands on its own, supported by a photographic tripod, stapled to a wooden post or something similar. Or mounted to the back of a chair.

Both the Swedish and Arizona versions were holding a paper stating that it represented a person who would have liked to be present, but could not be because the place is not accessible.

This method could also be used to make a statement at public hearings, etc.