Julie and her environment: 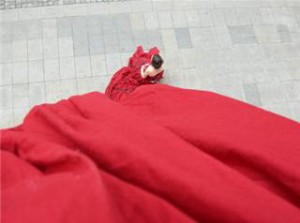 I “met” Julie via email. I saw her name on the program of Site Unseen, a site-specific performance art and media installation exhibition at the Chicago Cultural Center. She curated the event. I decided to attend the event because it seemed a good place to experience some avant-garde art. I was right. I also experienced art that seemed to speak certain themes. My impression of this night was strong. I was inspired, moved, and most of all hopeful. Hopeful that important themes such as war, pollution, loss of things precious, are being represented; and hopeful because that important work is being sought and supported. I wanted to meet the person doing the supporting and representing.

By email, we agreed to set up a phone interview. I had wondered if she would be back in the city soon, in case we could meet in person. She said, no, she had a health condition that prevented her from being in the city much. Ok, I thought. I also realized how “health conditions” are on my mind right now. I am mid thirty and know a few people with various diseases and have a greater respect? Fear? Awareness? Whatever it is, it points to frailty, finitude, vulnerability. 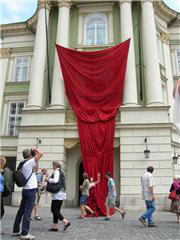 I congratulated her on the exhibition and mentioned liking her “red dresses” that I had seen on her website. She sent back a link to a recent dress installation. I flipped when I saw that it had taken place in Prague, capitol city of my adopted homeland. The photos were of a woman in a red dress in various poses of prayer, hope, looking up, down, and her dress-train was suspended from a clock tower or somewhere very high. It was so dramatic and serene at once. I told her she looked beautiful.

She replied that the woman in the pictures was her friend and collaborator, Clover Morell; that she could not go because of her illness. What illness could keep someone out of the Czech Republic, I wondered?

When we finally talked, I was hesitant to ask her about her illness, but, as she hadn’t so far hidden its fact from me, when it came up again I decided to ask her. I found out that Julie had been present at Site Unseen, behind a charcoal mask obscured further by a head scarf that covered most of her face. She suffers from an environmental illness so acute that being in the company of others, their dyes perfumes wafting about; that being in the city with its innumerable pollutants makes her sick, flu sick—for days. How did her immune system get such a blow from which it can scarcely recover? Well, it was for art. She was poisoned during a process of washing and drying army blankets for a project. She suspects the blankets may have been treated with pesticide in addition to being laced with moth balls. When she laundered them in preparation for the showing of her work, the chemicals volatilized in her studio. Breathing that stuff in that concentration, and for that duration was too much for her body to successfully eliminate. She is now diagnosed with chemical injury and is being treated by several doctors. Her best way to cope seems to simply remove herself from triggers but the list is long and includes all synthetic fragrances, even minute amounts of residue on other people’s hair and clothing. Soon after her diagnosis, she and her husband moved from the city to a country house northwest of the fray. Unfortunately, there seems to be no perfect place. Not only do the farms spray pesticide, but her neighbors use it on their lawns. 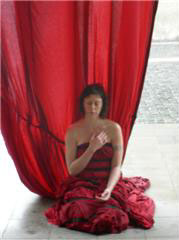 Never specifically an environmental activist, Julie is now hyper-sensitized to the issues of health and the environment. Her body is stripped of its defenses. Issues that may aggravate my enlightened mind, aggravate her enlightened body. Her body shows the colors of pollution when they drift by. Her illness has made her a bad consumer. She is not participating in the economy enough. She is not expressing her individuality with a brand name scent. She is not manicuring her lawn properly. She is not amused when others do it either. She is not impressed by flame retardant material after learning that the chemical which performs this wonder is present in the blood of children and is accumulating. Chemicals are a form of technology, she claims, and yet we are not considering it as such, not giving it its due weight, not seeing all the places where chemicals, especially petrochemicals are used to make the things we use and throw away (“can’t live without”). There it is. Plastic nation. Plastic, emblematic of our chemical world, is the bane of our existence, she says. And she hasn’t the “luxury” to believe anything other. 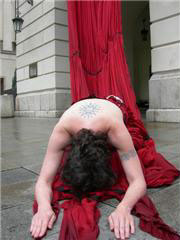 If I were to visit Julie, I would need to shower and put on her own clothes to minimize the bombardment on her senses by the all the ways we are “clean.” I would need to enter into her environment, slip in under the radar of her super sensitized senses. Would that we all were more vulnerable to the trash we breathe, walk by, endorse, purchase, ignore. Would that we would all try to tread lightly, impacting the world less with our scents and colors and permanence. Would that it were not culturally abominable to blend in with nature. I thank Julie for exposing something of my world to me. I hope she can continue to support, represent, and agitate artists to be her translucent body in the world.

Clare Tallon Ruen is a dance-MFA student at the University of Wisconsin, Milwaukee. This short piece is part of a larger research project titled, “Charting the Moment: a glimpse of the Present through the words and works of living artists and liberal artists.”

Clare came across Chicago-based performance artist/curator Julie Laffin while researching avant-garde art and became fascinated by her story of chemical injury. This essay reveals Clare’s growing realizations, as a “well” person, of what it means to be chemically sensitive in a world full of chemicals.


← Prev: Natural remedies for PMS Next: Help for migraines! →

END_OF_DOCUMENT_TOKEN_TO_BE_REPLACED 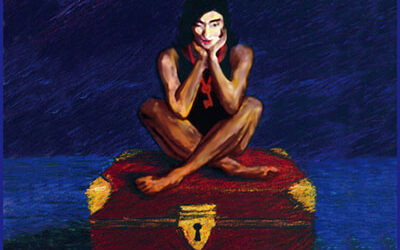