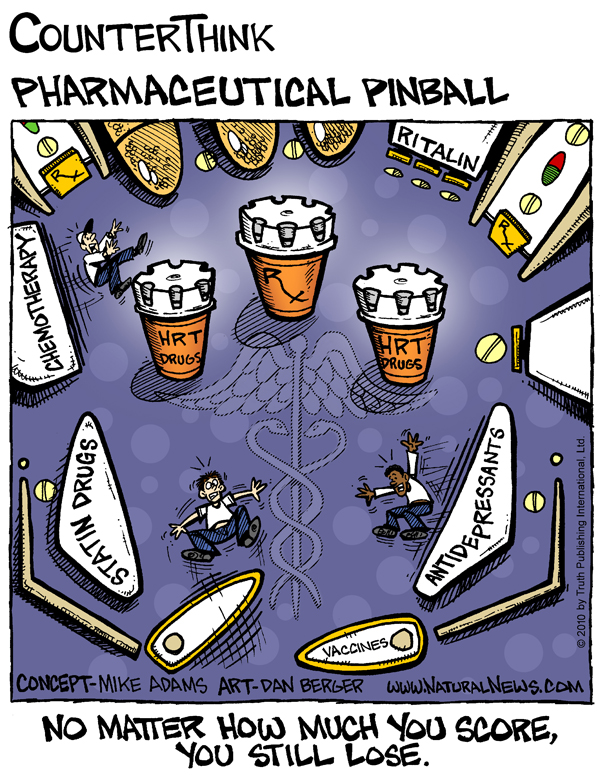 COMMENTARY BY MIKE ADAMS, CREATOR OF THIS CARTOON
(NaturalNews) There’s a pervasive (but false) idea in western medicine that the more pharmaceuticals you take, the healthier you’ll get. That’s how pharmaceuticals are marketed, in fact: Take these pills if you want to be healthier!

If you take one pill, the ads claim, you’ll have a healthy heart. Another pill gives you healthy moods. Yet another pill claims to give you healthy bones… or pancreas function… or blood pressure.. or even a day-long erection. If you believe all this, it stands to reason that the more chemical pills you take, the healthier you’ll become, right?

But hold on a second. Think of the people you know who are taking five, ten or even over a dozen medications. Are they the healthiest people you know?

Probably not. Not by a long shot. In fact, if you really look closely at this issue, you’ll find that the more pharmaceuticals you take, the WORSE your health becomes.

Pharmaceuticals destroy your health in the long run

That’s because prescription medications are synthetic, non-natural chemicals that all have negative side effects. Most medications cause liver damage, kidney damage or brain damage of some kind when taken over a long period of time. Even common over-the-counter drugs like Tylenol can destroy your liver (http://www.naturalnews.com/026565_d…). Heck, even the FDA now admits that.

In 2008, I announced a $10,000 reward for any person on multiple medications who could beat me in a contest of physical fitness (http://www.naturalnews.com/023476_h…). To date, not a single person has offered to take me up on that offer.

What’s the matter? If medications make you healthy, you would think that Big Pharma would be happy to put someone forward to claim the $10,000 and beat me in this health challenge. But we haven’t heard a peep from Pfizer, Merck, GlaxoSmithKline or any major drug company.

It’s obvious why, isn’t it? Any person taking a half dozen medications is going to be less healthy than someone who takes care of their health through nutrition, exercise and healthy dietary choices. The healthy-looking people shown in pharmaceutical advertisements are all actors who are faking it. They’re not even taking those drugs! They’re just being paid to read a script in front of a camera.

In the real world, the game of pharmaceutical pinball is destroying people’s health and lives. People get put on one drug for one symptom, and then that drug causes three more symptoms. Then the patient goes to the doctor who medicates those three new symptoms with three more drugs. This silly cycle of drug “treatments” leading to yet more side effects continues until the patient either runs out of money or dies from the side effects of the medications (heart attack, liver failure, stroke, etc.).

That’s how the game of pharmaceutical pinball really works. Except no matter how much medication you take, you never win. Only the drug companies win, and the longer you play, the more they win (and the more you lose).

Stop playing pharmaceutical pinball. Stop playing with your life. Say no to Big Pharma’s dangerous medications and look to foods, nutrients, herbal remedies and informed lifestyle choices to take care of your health instead.