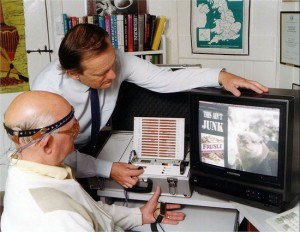 The NY Times reported last week that researchers are having some success treating attention deficit hyperactivity disorder (ADHD), depression, anxiety, and even autism with neurofeedback. A major benefit of the treatment is that it does not require taking medications which might have side effects or long-term health consequences.

Neurofeedback programs are made possible by the electroencephalogram, or EEG, a neurological diagnostic procedure which records patterns of thousands of electrical impulses in the brain.

From the NY Times article:

Neurofeedback practitioners say people have problems when their brain wave frequencies aren’t suited for the task at hand, or when parts of the brain aren’t communicating adequately with other parts. These issues, they say, can be represented on a “brain map,” the initial EEG readings that serve as a guide for treatment. Subsequently, a clinician will help a patient learn to slow down or speed up those brain waves, through a process known as operant conditioning. The brain begins by generating fairly random patterns, while the computer software responds with encouragement whenever the activity meets the target.”

Various studies have been conducted and the initial results are promising. One such study followed 1,000 autistic children over seven years and found a marked reduction in symptoms as reported by their parents. The results of another study, with only 36 subjects and focused on ADHD, will be announced Oct. 26 at the annual meeting of the American Academy of Child and Adolescent Psychiatry. Sponsored by the mainstream National Institute of Mental Health, if the results of this small study show clear improvements, there will most likely be financing for a larger study in the near future.

Not mentioned in this article but related to the topic, Dr. Jaclyn Gisburne, a Ph.D. from Rocky Mountain NeuroAdvantage in Glenwood, Colorado uses neurofeedback to treat the symptoms of Parkinson’s disease, chronic pain conditions, and other illnesses. She has seen significant reduction and even elimination of symptoms – Parkinson’s patients who had trouble holding a glass of water and drinking out of a straw due to tremors could lift and drink from a glass without tremors and their sleep patterns would normalize as they went through the program.

The surprising piece, however, is that Dr. Gisburne has found that everyone she has treated has had a significant trauma in their life that is related to their symptoms. The neurofeedback program itself resets dysregulated beta frequencies in the brain, and when a harmonic resonance is created, past traumas will come up naturally in patients. That’s right: the protocol reliably produces precipitating trauma stories from clients. When the trauma imprint is released from the body, the person heals. She uses Matrix Reimprinting (related to EFT, emotional freedom techniques), counseling and other techniques to address past trauma.

She says that with fibromyalgia, these past traumas are usually non-verbal memories from ages 0-3. With arthritis, the trauma can be from any age. With those suffering from Parkinson’s disease, she has found the trauma to have occurred within a two year span prior to symptoms appearing.

What is fascinating is that research in Parkinson’s disease to date has mostly focused on the neurotransmitter dopamine. Dr. Gisburne’s findings imply that dysregulated glia – non-neuronal cells that regulate neural activity – may be involved.

In an interview on Blog Talk Radio with Robert Rogers, Ph.D. of Parkinson’s Recovery, Dr. Gisburne states that when we are traumatized many processes shut down in the body, not just the brain but the digestive system, detoxification system, etc. This makes the body more vulnerable to environmental toxins, and toxins that wouldn’t normally come through the intestines and other systems do, overwhelming the immune system and entire body system. She feels that if you are suppressing a trauma, you are also suppressing the body – the detoxification system, etc. In order to fully heal, focusing on eliminating toxins alone is not enough; you need to eliminate the imprint of the emotional trauma in the body as well.

She says that the glia become dysregulated and create a non-normal firing pattern in the brain. With trauma, she explains, there is not a full re-uptake of many of the chemicals in the synapses of the brain, and they end up working like an early alarm system. Her program works to reset the beta frequencies, which is putting the brain more in line with how we were hard-wired. Part of her work in neutralizing and extinguishing trauma triggers includes meridian tapping to activate the parasympathetic system.

All of this sounds somehow related to the brain retraining programs being explored by some with environmental (chemical, electrical, mold, food, etc.) intolerances over the past year and who have shared their experiences with others in various support groups found on Planet Thrive’s online community. In a phone conversation this week, Dr. Gisburne’s partner Jan Harr shared that they had indeed worked with people with a specific chemical injury that then lead to spreading and reactivity to a wide range of chemical triggers. She said that when working with those who are chemically injured, they always combine a physical detoxification program supervised by a local naturopath with their neurofeedback and trauma release therapies. The detoxification program includes Epsom salt baths and/or soaking in their natural hot springs pool, probiotics, vitamin and mineral supplements, and other therapies, depending on the individual. Since these chronic and complex illnesses are systemic, the solution is never a one-size-fits-all program.

Their customized approach is an expensive undertaking, however. The initial assessment is $500 and they recommend two sessions daily (at $150 each session) for three weeks to start. That does not include the naturopath and detox program.

Although the results for people with chemical sensitivity do not seem as significant as those for Parkinson’s and other conditions they work with, they definitely seem promising.

We at Planet Thrive are very interested to hear from others with environmental intolerances who have tried neurofeedback, Matrix Reimprinting, and any other therapies aimed at the same result: to release past emotional trauma and normalize dysregulated brain function. Feel free to comment below or write to us privately with your experience.