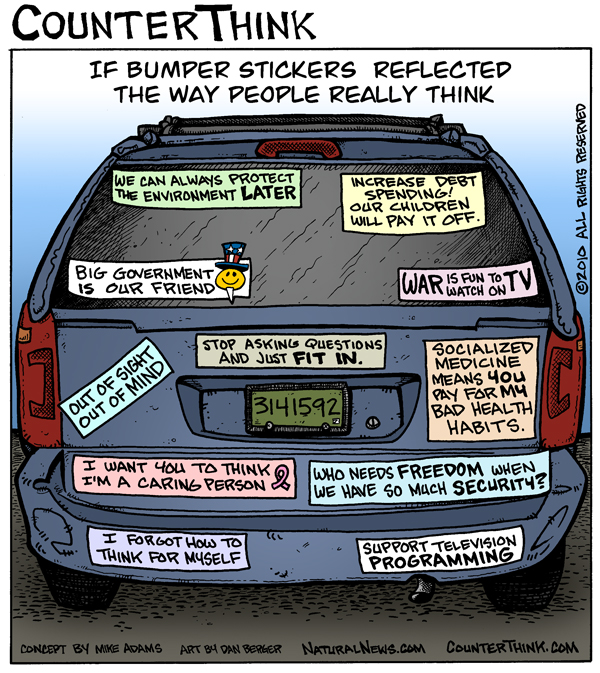 COMMENTARY BY MIKE ADAMS, CREATOR OF THIS CARTOON
(NaturalNews) They won’t admit it in person, but most guys think war is fun to watch on TV. That’s why wars are packaged as entertainment. There’s even a documentary on the topic called “Militainment, Inc.” by Roger Stahl that can tell you more (http://www.mediaed.org/cgi-bin/comm…).

Most people don’t really do anything to prevent cancer or cure cancer, but they want you to think they care about cancer by posting pink-ribbon bumper stickers on their cars or buying gimmicky “pinkwashing” pink products.

Most people say they support individualism and independent thought, but when it comes down to it, they really just want you to fit in and follow the herd.

What people really believe may surprise you

These are some of the provocative topics in my CounterThink Cartoon entitled If bumper stickers reflected the way people really think. As mid-term elections are nearing in the U.S., I thought it would be interesting to explore some of the real beliefs that people hold when they go to the voting polls.

For example, while they won’t really admit it in public, most people strongly support increased debt spending because it benefits them today while shifting the debt burden to their children. So why not have a bumper sticker that just tells the truth?

Other people believe a larger government will somehow solve all their problems, as if sending your hard-earned money to a bunch of bureaucrats ever solved anything. This is the thinking behind the recent health care reforms which, as people are beginning to notice, have so far only caused health insurance premiums to sharply rise, costing employees yet more money for a system of “sick care” that has proven itself to be an utter failure.

Now, the good news is that these bumper stickers don’t represent everybody — they only speak to the beliefs of the masses. Among those of us who are more aware, there are sharp, educated individuals who understand and follow principles of personal health responsibility. (Most NaturalNews readers share that belief.) There are some who understand the importance of fiscal responsibility and paying for our expenses rather than burdening future generations with our debt.

Many people are actively working to protect the environment right now, either through activism or public education, because they recognize and understand the importance of keeping our planet a viable biosphere for abundant life.

Some people, similarly, recognize the need to protect our freedoms rather than surrendering them all in the name of “increased security.”

You’ll notice, by the way, that these issues cross all political boundaries and speak to the key topics of Democrats, Republicans, Libertarians and other parties. This is not a pro-party political cartoon, it’s a pro-thinking political cartoon that challenges us all to think about what we truly believe and why we vote the way we do in the polls.

Short-term thinking is bad for humanity

Sadly, the voters in America (and most other countries) are dominated by short-term thinkers who want the benefits right now without having to consider the long-term consequences of their actions. Our outrageous national debt parallels the “ecological debt” that has been placed on the planet through pollution and habitat destruction. Both will require a very painful long-term payback that people won’t want to face.

Such is the nature of truth and consequences. Both economics and environmental chemistry follow certain laws of nature, and those laws have a nasty way of biting you in the rear if you ignore them for very long.

By the way, mathematicians and physicists will recognize the license plate number in this cartoon. It is an approximation of one of the most important numbers in our universe, and it signifies that what goes around comes around. I have a feeling that the voters in America aren’t going to like what comes around in the next couple of decades as the issues we’ve all tried to circumvent start to come due.

I’m just happy that there are so many intelligent, informed and caring people still remaining in the world who visit sites like NaturalNews and who are working tirelessly in various non-profits, websites, video campaigns and other efforts to literally help save the world.

We need more activism in our world on the really big issues. But most of all, we need people to improve the way they think and learn how to take a longer-term view of the consequences of our present-day actions. Any civilization dominated by short-term thinking is doomed to destroy itself. Only a long-term view (as in centuries) and an investment in a brighter future can rescue us from the pitfalls of short-sightedness.

← Prev: The best offense is a good offense: what we need to learn from AIDS Next: Can neurofeedback help chemical sensitivity? →