Fly Away to XAND-ado, or Where Is Elaine DeFreitas?

a patient-activist urges ME sufferers to ACT-UP 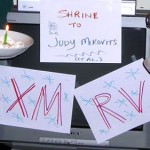 “The discovery of antibodies to the retrovirus XMRV in the blood of 95 percent of ME/CFS patients has led to an air of celebration best expressed by these 20+ year ME/CFS patients who partied with funny hats that read “I heart retrovirii.” It has also led to a new name for the illness: XAND or X-associated neuroimmune disease. But two questions are on everyone’s minds: how do we keep the momentum going when the patient community is so frail, and where is Elaine DeFreitas?

First, let me talk about XAND and why it’s so exciting.

Retroviruses are rare in the general population, whereas most other viruses found in ME/CFS patients are ubiquitous. Most viruses discovered in ME/CFS patients have been common or fairly common herpesviruses such as CMV, Epstein Barr, HHV-6. A finding of a retrovirus in 95 percent of a patient group argues very strongly for causality.

This is why our ME/CFS luminaries — including the doctors who have put their careers on the line for ME/CFS patients — are making strong statements about XMRV being a cause of ME/CFS. Dr. Paul Cheney, who treated patients in the Incline Village cluster outbreak of ME/CFS, wrote, “The finding of antibody or active virus in 95% of CFS and 4% of controls is a result that argues for causality, in my opinion, especially with the associated RNAse-L corruption and NK functional impairment that might predict such an infection.”

Dr. David Bell, who treated a cluster outbreak of ME/CFS in Lyndonville, NY stated in his newsletter,”Now I am not going to be too optimistic — I think XMRV is going to turn out to be the ’cause’ of ME/CFS, and I think treatments will be available from every family physician in America who accepts Medicare. The question is whether this occurs next year or twenty years from now.”

I would argue that the best determinant of whether treatments are available in one year or twenty has a lot to do with whether we remain soft-spoken or ACT-UP, whether we deny history or make sure it never gets repeated, and whether we stop feeding the hands that bite us.” read Peggy’s full blog post