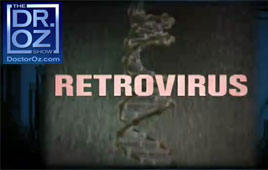 Dr. Mehmet Oz, made famous by his frequent appearances as the health expert on The Oprah WInfrey Show for five seasons, will be featuring Chronic Fatigue Syndrome/Myalgic Encephalomyelitis (CFS/ME) on his talk show this Thursday, December 3, 2009. Check local listings for times. During the show he will explore the recent discovery of the XMRV retrovirus in close to 100% of CFS/ME patients’ blood, including the implications for cause and treatment. In the show’s video promo, he says this could affect over 10 million people. Please post your comments after watching the show in the comments section below.

← Prev: Hemo-bartonella Next: Many 'Cides of Modern Food Production →