transformation is possible at any age 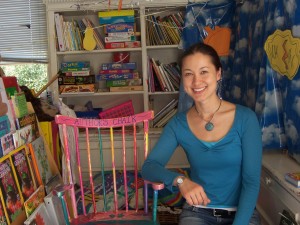 Some of us are lucky enough to get to a point in a serious chronic illness where we are able to embrace the experience as a personal healing journey: one that gives us the space to reevaluate all we’ve learned in life, rethink our values, shed old behaviors that no longer serve our higher good, allowing us to become richer, wiser people. Then there are those rare few who make radical changes in their life without the prodding of a serious chronic illness or otherwise traumatic event. Such is the case with Melia Dicker, a 28 year old who went back to kindergarten and over the next several months repeated her education up through college, because she felt her life was off track and she wanted to start over from the beginning. She felt there had been something wrong with her education, and the way to break free of it would be to revisit the experience and transform it.

Melia documented her journey on a website called ReschoolYourself.com. She writes

At what point in school had I lost my way, and how? How could I become as joyful and creative an adult as I was as a child?

The only way to find out was to go back to where I started: Kindergarten. Then first grade, then second, and so on until college. In the fall, I would spend about a week in each grade at my old schools. My goal would be to go backward, to make peace with my past. In the spring, I would reeducate myself, the way I wanted to. My goal would be to move forward, into a future of my own design.

I would have the opportunity for something that almost everyone dreams of: a do-over.

The name of the project came to me: Reschool Yourself. A command to me, and to others, that transformation is possible at any age. The project was never just about me. It had three goals: help to transform myself, other people, and the education system.”

Melia’s story has inspired me to take a look at the ways that I’ve chosen to reschool myself in adulthood, both pre- and post-illness. My path has been about learning how to nourish myself — both on the plate and beyond. I have studied nutrition, food preparation, permaculture, ecovillage design, personal/emotional growth, breathwork, meditation, energy work, yoga, tribal bellydance, and more.

What are the ways in which you have reschooled yourself, or would like to? What aspects of your education were lacking? What are the things you learned in school that you are grateful for? Please share in the comments section below.