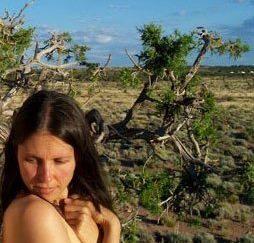 Scott Killingsworth of Arizona has nominated his friend Julie Genser, founder of Planet Thrive and co-founder of the housing non-profit re|shelter, for a prestigious Rare Life Award. This honor is given to those who exhibit Courage, Leadership, Survival, Heroism, Devotion and/or Character by Eagle Rare, makers of Single Barrel Bourbon Whiskey. The grand prize winner will get $30K donated to the charity of their choice. Julie will donate the funds to re|shelter if she is selected. The public can vote on nominees until January 3, 2013, when the contest ends.

Finalist judging will take place from January 4, 2013 to February 15, 2013, and will be based on the following criteria: a) Relevance to the Promotion Theme (40%); b) Originality and Creativity (40%); c) Story Quality and Clarity (10%); and online voting by website visitors (10%). Ties, if applicable, shall be broken using only criterion a).

Criterion a) shall be interpreted to mean how well a submitted story entry depicts the “Lead a Rare Life” theme. The entries with the highest overall scores from the top 20 will then be placed on the Eagle Rare “Lead a Rare Life” website as the grand prize winner and 6 other contestants will be posted as runner up winners. The 6 runners up will each get $3K donated to their charity of choice. vote for Julie now

If re|shelter receives this much needed funding, Julie hopes to use it for a prototype “sleep shed” project or one of re|shelter’s other important planned projects to help address the housing crisis for those disabled by environmental intolerances. In order to be considered for the award, Julie needs to receive thousands of votes between now and January 3. The other nominees have been online for months and some have racked up over 50K votes. You can vote once every 24 hour time period. vote for Julie now

To show your support for Julie and the chemically sensitive community, please make a note to vote every day from now until January 3, and forward to any mailing lists you have or group discussion boards that are supportive to those with environmental illness. Thank you for your support!

Rebuilding a life – and global community – after a debilitating illness.

“Julie, you have to be pleased because every day you make someone’s life better because of all you know, share and do.” — Doris J. Rapp, M.D., mother of Environmental Medicine

“You are doing sacred work — holding and supporting this community with love, with information, with art, with science, with soul…I am honored to be a tiny part of this healing center.” — member of Julie’s website Planet Thrive

The mission of your “Rare Life” award speaks directly to the uniqueness and heroism of my friend Julie Genser. In the mid-90’s, Julie developed a rare neurological and immune disorder in response to multiple severe toxic environmental exposures. She started experiencing severe respiratory reactions to low levels of chemicals and electromagnetic fields in most clothing, bedding, heating systems and other everyday items most of us take for granted. Julie was forced to leave her comfortable life in NY for a warmer climate she could survive in, first moving to Florida then finally landing in a small rural community in Arizona. She arrived wearing just a bathing suit (no longer able to tolerate clothing) and slept on a cold tile floor for two years without any bedding.

Julie was no longer able to work, socialize, or do basic errands in public places, and was forced to retreat to a largely isolated existence. But what was rarer than the health condition that devastated her life so completely, was how she chose to respond to it. Rather than give up in despair, Julie used her limited energy and resources and turned to the computer to create the premiere online community for people suffering and isolated from similar environmentally based illnesses.

Through her website PlanetThrive.com, Julie shares coping strategies and nurtures a supportive network of those with similar rare medical problems for which there is little existing help. Over the past few years, she has led the effort to bring cutting edge neurological treatments to her community, resulting in vastly improved quality of life for thousands of people. After being displaced from her home multiple times, she understood firsthand that homelessness was the number one threat to people with her condition, and co-founded a non-profit named “re|shelter” (http://reshelter.org) to help solve this critical problem. In October 2012 re|shelter disbursed $13,500 in grants to help people already homeless, or at risk of becoming homeless, due to disabling environmental intolerances. Julie also runs a popular Facebook group that assists people in finding “environmentally safer” housing across the country.

What is so incredible about what she’s accomplished is that she started with nothing – sitting alone in a bare room – her only access to the world through her laptop. She researched her symptoms, contacted respected professionals to contribute their expertise to her website, and recruited an impressive Advisory Board for re|shelter. Her mother says, “Julie was handed a bowl of lemons. She took every lemon, cut it up, diced it, minced it, and squeezed out every last bit of juice. Not only did she make lemonade, but she then served it with love to everyone around her.”

Despite her limited energy and cognitive focus, Julie realized early on that just a little bit of effort every day could add up to something greater. She felt a strong calling to help those less fortunate, since there are so few resources to help people who need it most. Tired of the “way things were,” she made a conscious choice to be a part of the solution every day of her life, and to make a difference for others in the ways she was able to. Since becoming ill, she has truly lived a life of service, using the solutions to her own challenging experiences as a lifeline for others with few or no resources. She is loved and admired as a compassionate leader by thousands. She is a person with rare attributes, living a rare life. Indeed.

← Prev: The best little car corral in Arizona Next: Walkathon Across America for Environmental Illness →