2nd edition of Healing Lyme has been published 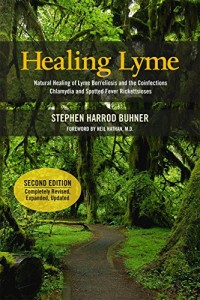 The long awaited 2nd edition of the acclaimed Healing Lyme: Natural Healing of Lyme Borreliosis and the Coinfections Chlamydia and Spotted Fever Rickettsiosis by master herbalist Stephen Harrod Buhner has been published. This new edition is three times longer than the original edition, includes a synthesis of several thousand journal articles on lyme disease, a depth look at two lesser known co-infections (chlamydia and rickettsia), and an extensive, and much more sophisticated protocol for treating lyme disease (and those co-infections), most especially neurological lyme infections.

From the book description: “Healing Lyme examines the leading, scientific research on Lyme infection and its tests and treatments, and outlines the most potent natural medicines that offer help, either alone or in combination with antibiotics, for preventing and healing the disease. The book has been a bestseller for over a decade, and during that time the author has had contact with over 25,000 people who have used some form of these protocols during their healing journey. This edition has been significantly updated, fully revised, and expanded to reflect the increased understandings from that extensive contact, including depth-treatment experiences with hundreds during the past decade. Healing Lyme is the primary text in print on what Lyme bacteria do in the body and how natural approaches can heal the disease. It is the first book in print covering depth understanding and treatment of chlamydial and rickettsial coinfections. This new updated version of Healing Lyme joins the author’s other two books on the treatment of Lyme coinfections (babesia, bartonella, mycoplasma, anaplasma, and ehrlichia) and completes his exhaustive work on these stealth pathogens.”

In celebration of the publication of this second edition, which has been several years in the making, Stephen Buhner has agreed to reopen his Q & A on BuhnerHealingLyme.com for the month of March 2016 only. He will answer a select number of questions submitted regarding the updated protocols shared in his new book. If you would like to submit a question to be considered for the Q & A, please make sure you read the updated version in full before sending your inquiry in before the end of February 2016. Stephen’s response will be sent to your personal email as well as published on the Buhner Healing Lyme website in March for our readers to benefit. This will be the only time we open up the Q & A this coming year, so if you would like to take advantage of this opportunity to have Stephen respond to your personal question, please make sure you order the updated version and read it before submitting your question by the end of February 2016.