The Truth About Tattoos 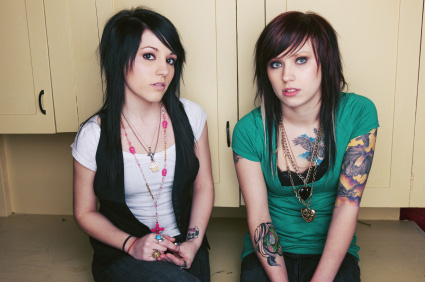 A FRIGHTENINGLY GROWING NUMBER OF TEENS and young adults around the world are injecting dangerous chemicals under their skin in the name of art and self-expression. A trend that started growing in America and Europe in the early ‘90s, tattooing soon became so popular that 36% of Americans aged 25-29 had at least one body tattoo by 2003.1 The numbers have undoubtedly risen in the four years since; tattoos are now well-entrenched in the mainstream. Even the media regularly glorifies tattoo culture, as evidenced by reality TV shows like The Learning Channel’s Miami Ink and LA Ink, and Inked on A&E, as well as frequent magazine sightings of tattoo-sporting celebrities like Paris Hilton, David Beckham, and Angelina Jolie, and print ads featuring tattooed models and athletes, like Calvin Klein Underwear’s Fredrik Ljungberg (who, by the way, had a severe allergic reaction to his tattoos and had to have a lymph gland removed).2

What’s formaldehyde and antifreeze doing in your skin?
Tattooing is an art form that has been used for centuries by tribal societies in religious rites and as a natural part of life. At first banned and then appropriated by Western culture, tattoos have recently developed as a decorative art of self-expression; used by some to celebrate events, memorialize a departed loved one, or as a show of commitment to a life partner. There is one thing for sure: all tattoos have a story. What’s not so clear is exactly what we’re injecting into our skin for art’s sake.

A far cry from their tribal predecessors made with dyes from the natural environment, many of today’s tattoos contain an unknown conglomeration of metallic salts (oxides, sulphides, selenides), organic dyes or plastics suspended in a carrier solution for consistency of application.3 In the European Commission’s report on the health risks of tattooing, they note that close to 40% of organic colorants used in permanent tattoos in Europe are not even approved for use on the skin as a cosmetic ingredient and just under 20% of the colorants studied contained a carcinogenic aromatic amine. Many of the chemicals found were originally intended for use in writing and printer inks, as well as automobile paints.4 These inks are injected deep enough into the skin that often tattoos will not even be destroyed by severe burns.5

In America, the FDA regulates some of the ingredients in cosmetics worn on the skin, and vitamins, drugs and food additives ingested into the body, but it does not regulate these toxic inks we put under our skin. Their official stance:

“Because of other public health priorities and a previous lack of evidence of safety concerns, FDA has not traditionally regulated tattoo inks or the pigments used in them.“6

The FDA also does not require ingredient disclosure on the inks—they are considered proprietary (trade secrets)—and so tattoo inks may contain any chemical, including those known to be mutagenic (capable of causing mutations), teratogenic (capable of causing birth defects), and carcinogenic (capable of causing cancer), or involved in other biochemical reactions in the body that might take decades to appear.3 Surprisingly, the FDA does not list cancer in their list of potential tattoo risks, citing only infection, removal problems, allergic reactions, granulomas, keloid formation, and MRI complications.6 The job of testing and legislating the use of tattoo pigments in permanent cosmetics is left to the state. In California, specific ingredients are prohibited and the state will even legally pursue companies who fail to disclose tattoo pigment ingredients to the consumer. They recently brought suit against nine pigment and ink manufacturers for inadequate labeling.5 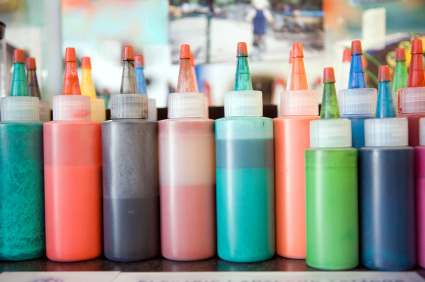 What’s in a tattoo?
Without full disclosure of ingredients, it is impossible to know for sure what is in tattoo ink. Added to this, each color and each brand of ink has completely different ingredients, according to a 2005 study out of Northern Arizona University.7

The carrier solution itself might contain harmful substances such as denatured alcohols, methanol, rubbing alcohol, antifreeze, detergents, or formaldehyde and other highly toxic aldehydes.3

The oldest pigments came from using ground up minerals and carbon black. According to Wikipedia.org, a wide range of dyes and pigments are now used in tattoos “from inorganic materials like titanium dioxide and iron oxides to carbon black, azo dyes, and acridine, quinoline, phthalocyanine and naphthol derivates, dyes made from ash, and other mixtures.” Currently popular is Acrylonitrile butadiene styrene (ABS plastic), used in Intenze, Millenium and other ABS pigmented brands.5

The price of ignorance.
Although allergic reactions to permanent tattoos are considered rare given the number of tattoos applied yearly—in the neighborhood of 5 million9—they can occur, along with scarring, phototoxic reactions (i.e., reactions from exposure to light, especially sunlight), and other adverse effects. Many people have reported reactions to the intensely colored plastic-based pigments. There are also pigments that glow in the dark or in response to black (ultraviolet) light. Some of these pigments may be safe, but others are toxic and even possibly radioactive.9 Plastic-based inks (e.g., glow-in-the-dark ink) have led to polymerization under the skin, where the tattoo pigment particles converged into one solid piece under the skin.9

Allergic reactions have occurred with some of the many metals put into tattoo inks, nickel being one of the most common metal allergies.8 Others have reacted to the mercury in red cinnabar, to cobalt blue, and to cadmium sulfite when used as a yellow pigment. Some inks were found to have high levels of lead, some contained lithium, and the blue inks were full of copper.7 Allergic reactions may occur infrequently with permanent tattoos, but the long-term health effects are still unknown due to the lack of regulation, testing, and long-term studies.

In contrast to the low incidence of reported allergic reactions to permanent tattoos, however, certain temporary Henna tattoos have been very problematic. Henna tattoos that contain the dark brown dye para-phenylenediamine (PPD) can cause a delayed allergic reaction and subsequent PPD hyper-sensitization that may permanently prohibit one from using sulfa drugs, PABA sunscreens, benzocaine and other anesthetics, and hair dyes. Fragrance sensitization may occur, and in some cases, the reaction will include skin necrosis, scarring, and hypo-pigmentation. Analysis of henna dye used on persons who reported allergic reactions has shown the presence of toxic chemicals from hair and textile dyes, in addition to PPD.

The question of toxicity is multifaceted; there are others factors that may exponentially increase the serious health risks associated with tattooing. When alcohol is used as part of the carrier base in tattoo ink or to disinfect the skin before application of the tattoo, it increases the skin’s permeability, helping to transport more chemicals into the bloodstream. Alcohol also works synergistically with mutagens, teratogens, and carcinogens to make them even more harmful, increasing the chance that they may cause mutation or disease, both at the site of the tattoo and systemically.3

Other health risks.
In addition to allergic reactions and the unknown long-term health effects from the metal salts and carrier solutions that make up tattoo inks, there are other health risks involved. Skin infections, psoriasis, dermatitis and other chronic skin conditions, and tumors (both benign, and malignant) have all been associated with tattoos. Due to the use of needles in tattoo application, there is also the risk of contracting infectious diseases such as tetanus, herpes simplex virus, staph, HIV, AIDS, Hepatitis B and C, and even Syphilis. And those with tattoos might not be able to get a life-saving MRI (Magnetic Resonance Imaging) test if they need one—some hospitals and testing locations will refuse to do an MRI on people with body tattoos due to the metal particles in the tattoo, which may cause a burning pain during the test.10

If you plan on having your tattoo removed, you should be aware that some of the pigments used (especially Yellow #7) are phototoxic and may break down into toxic chemicals in the body when removed with UV light or laser, common techniques used in tattoo removal. The toxic end-products eventually wind up in the kidneys and liver, adding to your total body burden.5

Think for yourself.
In an ideal world, the ‘trade secrets’ clause that allows companies to put profit over public health would be disallowed for all products used topically, transdermally, or ingested into our bodies. However, in the absence of federal regulation to protect the consumer from unqualified tattoo artists, unhygienic tools and application methods, and highly toxic inks, the best advice for the youth of today is abstinence from tattoos. At the very least, one should find out if their state has any regulations on tattoo inks, and always ask to see the Material Safety Data Sheet (MSDS) for any pigment or carrier used to see basic health and safety information for the ingredients involved. Skin tests should be performed prior to tattoo application to see if you are allergic to any of the ingredients. Although certain tattoo ink ingredients may be plant-based or otherwise considered safe and non-toxic, the truth is that no long-term studies have been performed confirming that they are safe to inject as a permanent cosmetic. Bottom line: don’t trust the government, tattoo ink manufacturers, or tattoo artists to give you accurate and complete information on the toxicity of the pigments and dyes being used—at least not just yet.