Chanukah (or Hanukkah) means “rededication” and is an eight-day Jewish holiday commemorating the reclaiming of the Holy Temple in Jerusalem over 2,300 years ago. The temple was rededicated after a three year battle ended with the Maccabees driving the Syrians out of Israel. Following their victory, it is said that the Maccabees cleaned the temple and then went to light the “eternal flame” — a symbolic oil lamp found in all temples, whose flame was never to be extinguished — and there was only enough consecrated olive oil to burn for one day. Miraculously, the oil burned for eight days — just enough time to press, prepare and consecrate fresh olive oil. To mark the occasion, each year Jews light candles on a menorah over eight days to symbolize the miracle of the oil. In addition to the lighting of the candles, there are special foods, songs, and games that help celebrate this holiday.

After becoming severely chemically sensitive myself in 2004, I continued to attempt to attend the annual family Chanukah celebration at my ultra-Orthodox cousins’ home in New Jersey. They would go out of their way to prepare a special meal just for me — plain roasted chicken with steamed carrots — while everyone else had Chinese takeout. They would remove the air fresheners from their bathroom 24 hours before my arrival and refrain from using scented shampoos the day of the gathering. They showed great interest in doing what they could to include me in the celebration and I was always very touched by their efforts.

A special part of the day was when each of their 7 children (now eight!) would light their own menorah and say the Hebrew Chanukah prayer. That meant 14 synthetic candles would be lit — a nightmare for someone with a reactive airway disease. I would lock myself in a room upstairs and remain there for the rest of the day, but would invariably still receive a toxic hit to my lungs and brain. After two years of this I stopped going and gave up on celebrating Chanukah. I didn’t realize back then that those with severe chemical sensitivities can continue to honor this tradition each year without compromising their health. With a little ingenuity and advanced preparation, it is possible to celebrate a chem-free Chanukah. 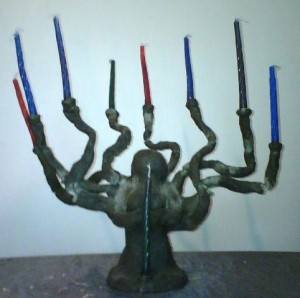 The menorah
My friend Jamie combines her love of earth-based spirituality with her religion of birth. When Chanukah rolls around each year, she gets to choose from three beautiful menorahs to celebrate the Festival of Lights. The first is an electric menorah that no longer off-gasses any fumes. The second is a safe metal menorah that she is able to use indoors with soy or beeswax candles (See Luminous Creations, Big Dipper or HH Judaica for candles). The third is a goddess-tree ceramic menorah hand-crafted by Jamie herself, with arms branching out to hold each candle. Jamie shares the meaning behind her homemade menorah and how this holiday intersects with the winter solstice:

“Chanukah has long been celebrated as a miraculous victory of the Jewish people’s survival, both politically and spiritually. However, this holiday also has deep roots in earth based spirituality and ancient goddess religion. Chanukah is ultimately the Jewish winter solstice. The menorah was originally a symbol of the goddess Asherah, the Canaanite mother goddess. It was a depiction of Asherah as the tree of life, the base of the menorah being the trunk, and the extensions, her branches. Menorahs are often seen flanked by lions, which is one of her primary sacred animals.

During Chanukah we honor the return of the light, by lighting an increasing number of candles each day on the sacred tree, which reflects the growing light of the sun on the earth, and on the tree of life, which nourishes and sustains us. This is an old folk tradition. The lighting of lights on the Christmas tree is also rooted in solstice practices. Depending on the time of year Chanukah falls on, since Jews are on the lunar calendar, Chanukah can also can be a time of holding and sustaining the light during the time of increasing darkness.

The miracle of the oil lasting for eight nights can be seen as a seasonal message. To remind us that even in the darkest time of year there is still the hope of returning light of solstice. That even in darkness the miracle of light still exists.“ 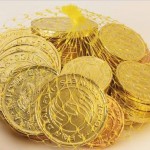 Dreidel
A dreidel is a four-sided spinning top with a Hebrew letter on each side (Nun, Gimmel, Hay, and Shin) which is an abbreviation for the phrase “Nes Gadol Haya Shom” or “A Great Miracle Happened There.” It is used to play a fun game of chance to win game pieces, which can be Chanukah gelt, pennies, nuts, raisins. etc. A Google search should make it fairly easy to find a dreidel made of a non-toxic material like stainless silver or other metals, porcelain, crystal or glass. 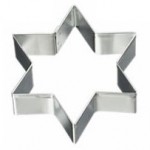 Chanukah Gifts
Children are usually given one gift for each night of Chanukah. Some less toxic gift ideas include: an organic cotton chef’s apron and Chanukah-themed cookie cutters; a ceramic piggy bank; and a children’s gardening starter set. 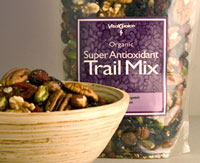 For adults who are exchanging gifts, food-related items are always a big hit: check out the cute stainless steel To-Go Ware® 2-tier food container, salivate over the deliciously healthy Organic Super Antioxidant Trail Mix from Vital Choice, help preserve culture by sharing native seeds, or buy a ceramic coffee mug and pair it with some healing herbal tea). Homemade gifts are also a great idea — hand-knit organic wool mittens, a decorative tin filled with freshly baked gluten free cookies, or a piece of artwork from the heart are always appreciated by the lucky recipients.

← Prev: 12 Ways to Stay Warm this Winter with Severe MCS/ES Next: Using Dance to Rewire a Cerebral Palsy Brain →